The RRS was glad to have another launch event at our Mojave Test Area (MTA) on Saturday, July 13th. Our event this time was with Operation Progress in Watts. Thanks to our partnership with the LAPD CSP, we are able to fly nine alphas and a beta rocket at this event. It was to be a typically hot July day in the Mojave, but the winds were still through the morning picking up a little as the afternoon went on.

This was my first time as the event pyro-op. New member, Kent Schwitkis of Compton College and Waldo Stakes assisted me with the operations as we gave our young rocketeers a great view of their hard work.

As the LAPD CSP arrived at the RRS MTA, the society prepared to give a site tour to the students followed by our safety briefing.

One of the interesting features I noticed with this set of alphas was the use of modelling clay at the nozzle to hold back the micrograin propellant. This proved to be an equally effective method of holding back the propellant when the rocket is in firing position as the typical phenolic thin disks we commonly use.

One of the alpha rockets was outfitted with a whistle on one of its fin. Although imparting a spin during flight, the alphas tend to remain somewhat stable in flight. The results from this flight was somewhat disappointing as the whistle could not be clearly heard in either ascent or descent before impact.

Our last rocket for Compton College was the larger RRS standard beta rocket. This two-inch diameter powerful vehicle made its impressive mark on the launch pad as it tore into the sky. After the launch, we took break for lunch. With the day growing hotter by the hour, our partners with the LAPD CSP and Operation Progress bid the MTA and the RRS farewell as they returned to the city.

Following lunch, our second group at the event was a team from Compton College made up of Prof. Kent Schwitkis and Brian Johnson and their students. The Compton Comet was a standard alpha rocket outfitted with an instrumentation package and a parachute.

New RRS member, Professor Kent Schwitkis got his first experience with loading the micrograin propellant in the Compton Comet at our loading area. This is a rite of passage for many of our new members. Although old and grossly inefficient, the zinc and sulfur powder propellant combination offers a simple and powerful combination to lift rockets in a yellow rushing plume.

The Compton Comet was loaded by the team into the alpha launch rails. All of us retreated to the concrete bunker for firing.

The Compton Comet parachute somehow failed to deploy. The ballistic return of the rocket meant extraction by the time-honored method of shoveling. The Compton College team showed tremendous fortitude in the scorching 110 degree weather. The fruits of their labor was the return of the instrumented payload including the data chip inside.

Initial results showed that data was taken throughout the flight. The results are being reviewed by Compton College to be reported later to the society.

This was a very successful launch day at the RRS MTA and the society was glad to support the Operation Progress and Compton College student teams at our Mojave Test Area. For more information on similar rocket building programs with the RRS, contact our events coordinator, Larry Hoffing.

For all inquiries about using the RRS MTA, contact the RRS president, Osvaldo Tarditti

The RRS held their monthly meeting on July 12, 2019, at the Ken Nakaoka Community Center in Gardena. We had a very large turnout with over 26 people coming in to see the three different presentations we had and catch up on the latest news.

After our reading of the treasury report, we had a special announcement of the induction of five new administrative members to the RRS. Our society is growing and this is in large part to the great participation we’ve been having and the dedication of the many talented people at the RRS.

Larry Hoffing gave us a short summary of the UCLA Rockets project he supervised at the RRS MTA. This Wednesday, July 10th, event was the first since the pair of earthquakes that rattled the nearby town of Ridgecrest in the Mojave. The RRS is happy to report none of our structures had any significant damage and the MTA is very much ready to operate.

We next discussed the upcoming launch event at the MTA tomorrow with Operation Progress in Watts with the LAPD CSP. We’ll have several alphas and a beta launch. We also plan to have an alpha with a parachute recovery system put together by new member, Kent Schwitkis and his friend Brian.

RRS vice president, Frank Miuccio, has started a new educational program this week with the students of Boyle Heights. There will be 10 teams launching their rockets from the MTA in September.

Our first presenter was Kent Schwitkis who brought several of his students from Compton College to our Friday night meeting. Kent is a member of the Sierra Club and Ski Patrol and has many years of experience with wilderness survival and first aid. His presentation outlined the important of planning for many kinds of potential emergencies. One of the important results from this discussion was the need for the RRS to form a safety committee to begin preparing emergency plans and establish contact with the regional authorities in preparing to handle serious emergencies if the need would ever arise.

The second presenter we had at the meeting was Sam Austin, a senior at MIT. Sam presented his two-stage solid rocket design to reach the von Karman line.

Sam also detailed the kerosene-LOX liquid rocket design that was test-fired at FAR in January 2019. Although the test was short (3 seconds), his results were impressive and his injector survived intact..

The last presentation was by RRS members, Jack Oswald and Cooper Eastwood. They have been steadily improving their solid motor design and have fabricated their improved motor based on prior tests. Their goal is to reach the 50,000 foot altitude limit at the RRS MTA on July 20th. His “50 for 50” rocket is 12 feet tall and 5-inches in diameter built entirely from scratch. The launch is to be timed with the 50th anniversary of the Apollo 11 moon landing.

The solid rocket holds 30 lbm of APCP propellant with an estimated burn time of 3 to 4 seconds generating an impulse of 7000 lbf-sec. The rocket fully loaded is 84 lbm and should reach a peak acceleration of 30 G’s and a burnout velocity of Mach 2.5 as it reaches 50,000 feet.

A 100-foot drogue streamer will deploy from the recovery system followed by a 9-foot Apollo 11 replica parachute at 2000 feet. The flight events are driven by an upgraded classic flight computer from Eggtimer and an RRC3 dual deployment system from MissileWorks. The von Karman nosecone is 3D printed and the aluminum fin can was rolled onto the aluminum body to be painted in polished black and white pattern of the Apollo 11 vehicle.

The RRS looks forward to the successful flights of Sam and Jack’s rocket from FAR and the RRS MTA, respectively. Both will be on the 50th anniversary of mankind’s greatest achievement on July 20th.

If there are any questions or corrections, please contact the RRS secretary. The next meeting of the RRS will be August 9, 2019. 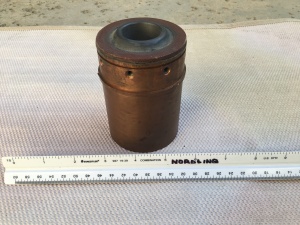 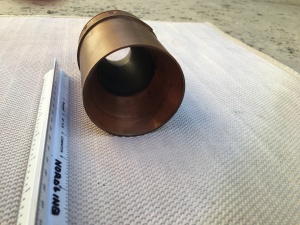