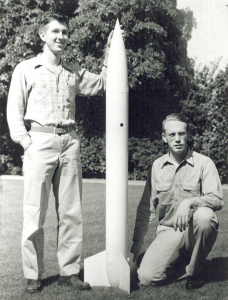 The Reaction Research Society is the oldest continuously operating amateur experimental rocket group in the United States. Originally beginning under the name of the Southern California Rocket Society, the Society was founded on 6 January, 1943 by George James.

Because of confusion in identity with the California Rocket Society, the society’s name was changed on 17 March, 1943 to the Glendale Rocket Society. After a few years of operation under that name, the Reaction Research Society came into official existence when this new name was adopted on 31 March 1946, replacing that of the Glendale Rocket Society. The leading organizers at that time were George James, John Cipperly, Jim and George Fox, Jim Hess and Charles Payne.

In the beginning years, society members designed, built, and launched hundreds of solid and liquid propellant rockets. Beginning in June of 1947, many rocket mail flights were conducted by the group. This first flight carried U.S. mail across the Colorado River from Winterhaven, California to Yuma, Arizona. In 1949 and 1950 members launched the first liquid monopropellant rocket from a desert test site just south of the town of Mojave, California. Static testing of many different liquid propellant rocket systems followed and the zinc dust and sulfur rocket design known as the standard RRS Beta was developed and perfected. On 7 December 1954, the Reaction Research Society was incorporated in the state of California.

In 1955, the Society acquired the property north east of the town of Mojave, California, that it still uses today for flight and static rocket test activities. In the heyday of the U.S. space program during the late 1950’s and on into the 1970’s, the Society enjoyed a fairly large and diverse membership. Professional aerospace engineers, high school and college students, and others of all professions and educational backgrounds were joined by a common interest in the science that was taking man into space for the first time. Providing a unique opportunity to safely conduct live firing test of substantial rocket propulsion systems, the Society’s activities were a great educational experience for many members, spectators, and family members. Dwindling somewhat in the number of members in the late 1970’s and into the mid 1980’s, the Society, nonetheless, maintained a core of amateur rocketry expertise. Members continued to build and fly rockets at the Mojave Test Area, have regular meetings, and publish reports and news letters. However, starting in 1989, the Society began a great resurgence of activity and membership growth. Many new members were interested in liquid rocket propulsion, hybrid propulsion, and new composite solid propellants. Membership grew from twenty or so local members to nearly two hundred members by 1996. As of our 75th anniversary in 2018, the RRS has dozens of members and going very strong.

In the many years since it was formed, RRS members have static tested and launched several thousand amateur built rockets using solid, hybrid, and liquid propellants. These vehicles ranged in size from one to twenty feet in length and have produced thrusts up to 10,000 pounds. Many present and former members who gained their first experiences with rockets in the Society are now employed in various capacities within the aerospace and rocket industries.  The Reaction Research Society remains dedicated to the goals and principles set down in its original charter.

The Society today continues, as an educational non-profit amateur organization, to promote experimental rocketry as an educational tool and to further general interest in reaction propulsion and its applications. In addition, the Society maintains facilities and provides the technical experience necessary for safe educational opportunities in rocket design and test activities. Members from around the United States are building rocket systems to test with the Society at the Mojave Test Area. Members in foreign countries regularly communicate with local members and some, as far away as Great Britain, are building vehicles to test here in the United States.

At one time, the Society had formed two satellite chapters, one in northern California and a second in Pennsylvania. Members in those areas met and conducted amateur rocketry activities locally while maintaining close ties with the Southern California parent organization. At this time, the RRS is the only chapter in operation.

With the ongoing improvements to the Society’s test facilities and the ever increasing sophistication of the projects being undertaken, the Reaction Research Society has grown into one of the largest and most vibrant of the amateur experimental rocket groups in the world today.

The principle challenges for the members of the RRS consist of designing, building, and testing solid, hybrid, and liquid fueled rockets. Activities include both group and individual projects and cover a wide area of interest. The field of rocketry provides an excellent vehicle for self-education because it alone encompasses so many other disciplines including electronics, metallurgy civil engineering, chemistry, aerodynamics, amateur radio, computer modeling, journalism, and photography, to name a few.

Through the years a consistent performance vehicle was developed by the RRS and is called the “RRS BETA”. Using a mixture of zinc dust and sulfur flour (called micrograin) for propellant, this basic design permits the amateur new to the propulsion arena a chance to build and launch a reliable, substantial rocket without an extensive knowledge of rocket theory. These rockets can consistently reach 10,000 feet in altitude. Modified BETA designs provide a simple and dependable launch platform to test a myriad of advanced instrumentation, payloads, parachute deployment mechanisms and multiple stage rocket concepts. Advanced solid composite propellants are also being pursued and developed by Society members. These new propellant grains offer greatly increased performance over the traditional micrograin mixes. New facilities are now being built to expand the Society’s expertise and use of these types of propellants. Motors up to five inches in diameter and producing up to 1800 pounds of thrust have recently been tested.

The RRS is currently the nation’s leader in amateur liquid propellant rocket propulsion development. Since 1990, many separate liquid projects have been undertaken. These propulsion systems range in thrust level from 25 to over 15,000 pounds, generally using liquid oxygen (LOX) as the oxidizer and kerosene, propane, or alcohol for the fuel. A milestone was reached in October of 1991 with the launch of the first amateur bipropellant liquid rocket in the state of California from the Society’s test site in the Mojave Desert. Since that time over twenty-five successful liquid propellant static and flight tests have been conducted.

The Society owns and operates the Mojave Test Area (MTA), a 40 acre test site located two and one half hours north of Los Angeles. The facility, equipped with several static test stands, launch towers, two steel reinforced concrete block houses, observation bunkers, and a rocket assembly building, is one of the most fully developed, privately owned sites in the country for experimental rocket launching. The unique location of the MTA under the controlled air space of Edwards Air Force Base and with miles of adjoining vacant desert allows the RRS to conduct extensive testing that is not possible in many areas of the country.