The RRS held our monthly meeting on Friday, November 9, 2018 at the Ken Nakaoka Community Center in Gardena. After coming to order and the reading of the treasury report, we discussed the agenda topics for this month. We were happy to be joined by new RRS member, Mike Albert.

[1]
Results of the RRS educational event at Weigand Elementary School with the LAPD CSP program was very positive. The launch event at the MTA had an excellent turnout, good demonstrations and ten alphas flown. We are becoming more effective in our execution at launch day, but there are still opportunities to improve the speed of operations while keeping our focus firmly on safety. 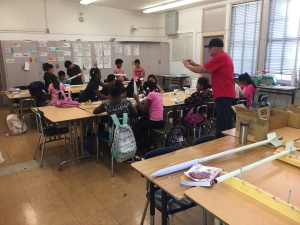 The weather in late October was ideal and we were able to enjoy the low winds and cool weather. With the low winds, the impact of all alphas were able to be heard and the timing by the kids showed the flight times to be very consistent. Many thanks to Osvaldo and Michael Lunny for doing a great job in packing them for what looked to be very good results. 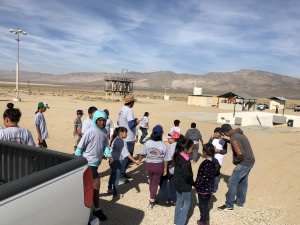 [2]
Frank is in the process of coordinating the next RRS educational event with LAPD to be a school affiliated with the Imperial Courts housing project which should begin in January 2019 sometime around the Martin Luther King holiday. The school will be announced soon once the details are finalized. The launch event will likely take place in March 2019. 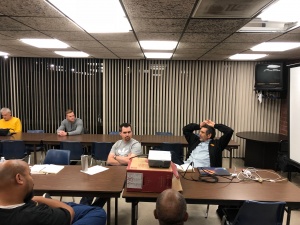 [3]
Results of Jack’s ballistic evaluation motor (BEM) testing were discussed. Jack and his team were not able to attend the meeting, likely due to the California wildfires in his area on that night. The testing rig had a few flaws and a missing part. It was unclear if any useful data came from the one test. Osvaldo is working with Jack on improvements to his BEM. A deeper discussion of Jack’s BEM will hopefully come at the next meeting. 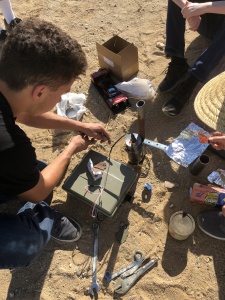 Jack Oswald’s BEM tied to a stake in the dry lake bed for stability; undergoing preparations for 10/27/2018 testing

[4]
Results from the horizontal thrust stand testing were discussed. Despite the problems with the foundation slab sliding with the firing of the micrograin alpha rocket, the load cell did record data which partially confirmed the impulse bit measurements from the past. Many people enjoyed watching the footage, but in all seriousness, an appropriate mounting foundation needs to be made to continue tests. 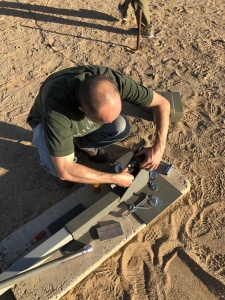 One proposed solution was to keep the existing shallow slab and drive a long stake into the ground to restrain the slab from moving south as the nozzle exhaust points north when firing. Another solution is to dig away the soil at the site and pour a deeper, rebar reinforced slab with the same 1/2″-13 female anchors. Keeping the slab low near ground level will keep this simple small foundation from preventing road access around the old blockhouse.

example of a buried foundation slab for the horizontal thrust stand

[5]
The Additive Aerospace flyaway railguide was discussed. The device worked well with the micrograin alpha rocket. The fit was good and the camera footage from different angles showed the alpha in the railguide rode the full length of the rail flying very straight. The flyaway railguide did not survive its maiden voyage, most likely due to impact from the fall back to the ground. Also, there is a concern that using the micrograin rocket on the aluminum 8020 rail would eventually jam the rails with the zinc-suifide residue that coats the surfaces after each launch. 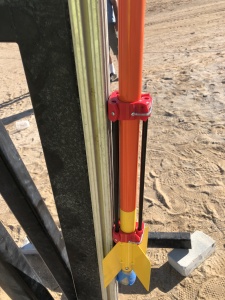 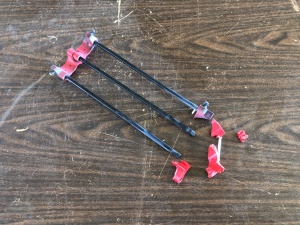 The recovered pieces of the flyaway rail guide. A successful launch but the mechanism didn’t survive the fall back to the ground

[6]
The RRS needs to finalize the 2019 symposium date very soon. Frank and others consulted the local calendars of relevant organizations and schools and we have arrived at two possible dates in April. The announcement for the 2019 RRS symposium will be made very soon as invitations and preparations must begin very soon.

Date to be announced soon, the RRS will hold the 2019 symposium at the Ken Nakaoka Community Center in Gardena

[7]
We had a discussion of safety issues and propellant handling protocols during the meeting. The issue is complex and there are different opinions about what the RRS should require of our attendees and membership, but two points that were made clear is that safety is most important and that the RRS will seek to educate our membership about compliance with the applicable laws and best practices from our membership experience.

[8]
The RRS visit to the Experimental Aircraft Association (EAA), Chapter 96, at the Compton Airport on November 3rd was a success. RRS and EAA member, Xavier Marshall, gave Osvaldo and I a good tour of the hangar and their machine shop. 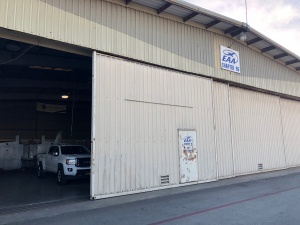 The EAA 96 hangar at the Compton Airport 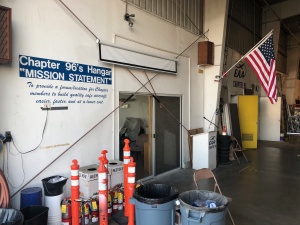 Inside the EAA 96 hangar, door to the office

The EAA has several airplane projects in work including one by Wilbur Owens. We ate lunch at Wilbur’s hangar and talked about future projects at the RRS including the standard liquid rocket. 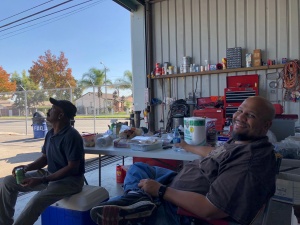 Relaxing after lunch in Wilbur’s hangar

The visit concluded with a tour of Tomorrow’s Aeronautical Museum and their rocket laboratory. We visited with some of the students who were working on their rocket project. The RRS was glad to see a lot of enthusiasm for the science we love. 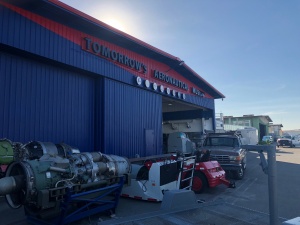 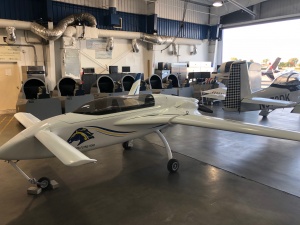 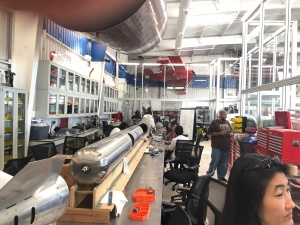 The EAA membership is quite reasonable at $80/year. Members have access to the facilities at the hangar including the lathe, mill and metal shears useful for both aircraft and rocket structures. For those interested in joining the EAA, contact Xavier Marshall.

[9]
The next order of business was the nomination of officers for the next calendar year by our administrative membership in attendance. The first step was appointing of the election chairman which will be Larry Hoffing. The prior executive council members were nominated to their same posts.

Larry will email our administrative membership for their votes in the coming weeks. Write-in candidates are allowed. The election ballots will be due a week prior to the next meeting. Results of the election will be announced at the December meeting to be held on Friday, the 14th.

[10]
The RRS may have another launch event at the MTA, but this is dependent on confirmation of the appropriate resources needed to support the event. This will likely take place as soon as next week, or possibly on the Saturday after Thanksgiving. The RRS will post the formal announcement on the “Forum” of this website if the event becomes confirmed.

[X1]
Osvaldo was up in Rosamond and was able to take a short trip to the MTA to extract more of the rockets he could find with his ratcheting extractor tool. 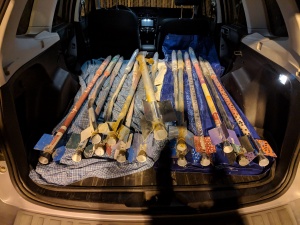 A pile of alphas extracted from downrange at the MTA

In addition to the 15 alphas he was able to bring back for refurbished parts, he found the beta rocket that UCLA had launched. 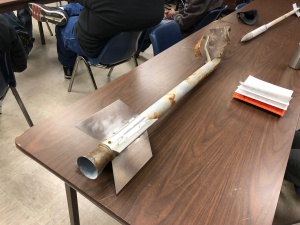 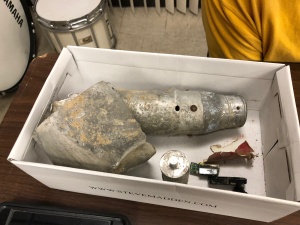 This beta rocket had an altimeter payload encased in a vented metal shell. Unfortunately, the Jolly Logic bluetooth solid-state device might have survived the crushing impact but the corrosion from possible rainwater intrusion after being planted in the desert dry lake bed sand for over a year proved to be fatal. 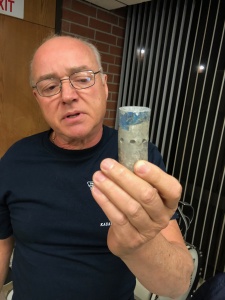 Payload case built into the beta rocket’s payload interior; note how the holes were crushed

Chris Lujan is inspecting the device, but it is very unlikely that any data will be recoverable from the chip. It is a shame as getting direct measurements of a beta flight would be great data to have. I guess we’ll have to try again? 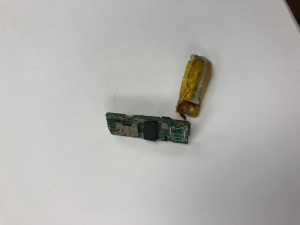 At the end of the meeting, I gave a brief overview of a second design for the RRS standard liquid rocket. The system is smaller than Richard’s initial 1000-lbf design and will use ethanol/LOX as propellants similar to prior RRS designs. One of the key features is the custom-built aluminum tanks to be made from common piping sizes and head designs made from aluminum round stock on a lathe. In the last few minutes, I was only able to provide a cursory outline of the project which will be discussed in further details at subsequent meetings. I have identified a few of the key parts including high pressure solenoid valves, aluminum tubing, AN fittings and a common composite overwrapped pressurant vessel commonly used in paintball sports. 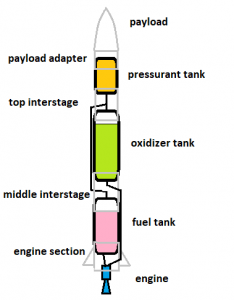 Wilbur and Xavier mentioned that the EAA is open to having the RRS use their office for one of our monthly meetings in the future. Given how close the Compton Airport is to the Ken Nakaoka Community Center in Gardena, this is quite practical. The RRS will make the announcement soon if one of our meetings in early 2019 will be at the EAA 96 hangar.

If there is anything here that needs correcting, please contact the RRS secretary.
The next RRS meeting will be Friday, December 14th, 2018.