The Col. Vernon P. Saxon Air Museum is located in Boron, CA. They have many aviation and rocketry exhibits including artifacts from the classic space age (Atlas, Saturn) and selected items from the more recent upstart companies such as Air Launch (Garvey), Truax, piece of the Percheron (Galveston) before the Conestoga.

Boron is just straight east from Mojave on the CA-58 highway. The museum is just before Domingo’s Mexican restaurant on the Twenty Mule Team Road located in the heart of much aviation history including Edwards AFB and the NASA Armstrong Flight Center.  Boron is a very, very small town so it should be easy to find.

I didn’t find a museum website, but “Roadside America” posted a review.

RRS member, Richard Garcia visited the site and took many photos.  I’m hoping he’ll expand a little on this post with some photos and observations he made.  It sounds like a fun place.

The monthly meeting for the RRS was held in Gardena last Friday night, August 12, 2016.

We had a prior member, Jason Wolven, pay us a visit from out of town.  The meeting was called to order at 8:04pm.

New batch of alpha parts was made. Aluminum nose cones proved to be cheaper to make than the plastic nozzles.  Nozzles, couplers, propellant and payload tubes all ready for more upcoming launches.

The MTA will be in use in the months of September and October.  The next RRS launch will likely be November.   Many of us have had interest in getting rockets ready as it’s been too long..

I brought in a few of the recovered alphas that my friend and I extracted over this last month. Many of them were experiencing hot gas leakage around the nozzle and sometimes at the coupler.   Most were landing straight west from the alpha rails but there was a lot of variance.  The cause of the hot gas leakage at the nozzle and coupler is blamed on the use of an overly thick burst disk.  The thinner types have been used and the problem has disappeared.  Osvaldo brought a compilation of the video footage from the multiple alpha launches in May with the Hermosa High students.  Richard offered to post this on the RRS’s YouTube channel. 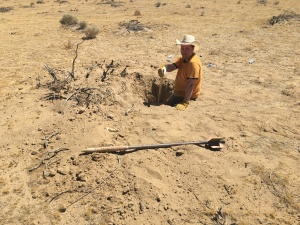 digging up an Alpha is hard work. painting the payload tube makes the dirt stick harder!

I did recover an upper stage from an older project.  Osvaldo recognized this as a design used by a member around 15 years ago? 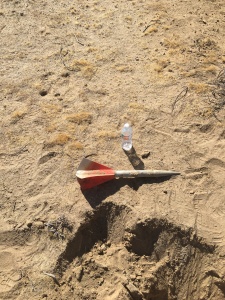 upper stage recovered at the MTA

Richard Garcia did some research on resources dealing with emergencies at the MTA.
Anti-venom is not available at the Mojave airport. Hospitals in the cities of Lancaster, Ridgecrest and Tehachapi may have anti-venom available as snake bite is a problem in the desert cities also.  I don’t know if the city of Mojave has emergency services or not?  The city of Bakersfield has sometimes provided emergency services to the Mojave area.

Mercy Air recommended calling 911 instead of calling them directly.  It is the fastest way to get help rather than trying to directly call the helicopter.  The helicopter crew generally won’t land without fire department being present or having someone qualified to guide the helicopter at its landing.  The RRS is looking into these requirements further to better aid in a potential rescue situation.

GPS coordinates are the best to find our site. Chris Lujan offered to bring that information. The RRS website has the MTA latitude/longitude coordinates.

Richard also mentioned that he recently visited the Col. Vernon P. Saxon Air Museum in Boron, CA which is straight east of Mojave on the CA-58 highway.  The curator for the rocketry exhibits was very helpful.  There are Saturn, Atlas artifacts from the classic space age.  There are also exhibits from the more recent upstart companies such as Air Launch (Garvey), Truax, pieces of the Percheron rocket (launched from Galveston) which came before the Conestoga rocket.   I’ll put a separate post to elaborate more on this museum if anyone wants to know more.

Wikipedia, under the “Amateur Rocketry” entry, mentions under “Notable Events” that the RRS (by a team with George Garboden) set an altitude record of 50 miles (80 km) in Black Rock on November 23, 1996.  Eight years later, the record was set by Civilian Space eXploration Team (CSXT) in 2004 at 115 km breaking the Von Karman line of space which remains the record today.  I had asked if the RRS has interest in recapturing the record and the response was strong. Some ideas were discussed.  This would be a substantial project but could be very practical with some good planning.

The RRS Symposium 2016 (October 15) is in work.  We’ll continue to discuss the symposium and have more details to post very soon.

Meeting was adjourned at 9:18pm.  If I have missed any other discussion topics in the August meeting or if anything isn’t correct, please let me know.