The RRS hosted a launch event on Saturday, July 22, 2017, with the students of Jordan Downs, sponsored by the Los Angeles Police Department’s (LAPD) Community Safety Program (CSP) at our Mojave Test Area (MTA). This launch event was the final part of the educational program put on by the RRS. The event was very successful as we fired 10 student alpha rockets and one more alpha from LAPD. 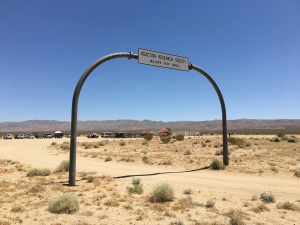 It was a typically hot day (105 F / 41 C) for late July at our private test site the Mojave Desert, but everyone was well prepared. Some even brought umbrellas which was a great idea to stay out of the sun’s rays. The misting fan we bought from Home Depot seemed to work well in the observation bunker. Home Depot was also very kind to donate water misting bottles for this event which helped tremendously in keeping people cool. RRS treasurer, Chris Lujan, was also very well prepared for the event as he saved me with a cold water bottle just after launch. Looking after each other is what we do. 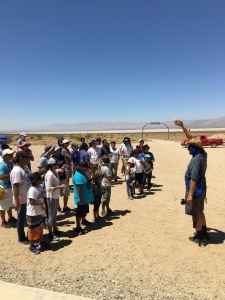 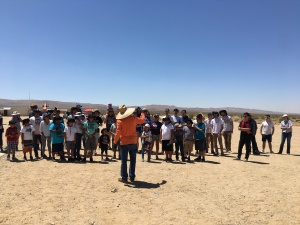 Larry addresses the Jordan Downs students at the MTA

Our pyro-op in charge was Dave Crisalli and he gave our safety briefing before we got started. The students were well prepared and seemed to get a lot from it. New RRS member, Alistair Martin was nice enough to film some of the briefing. 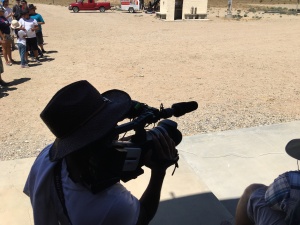 We also gave a propellant burn demonstration after the safety briefing to give everyone an appreciation for the power of the chemicals commonly used in amateur and professional rocketry. I have a still of the sample composite grain below. I took a video of the composite burn and will have it posted on our YouTube channel very soon. 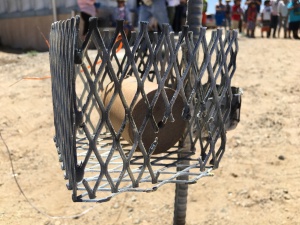 Larry and Osvaldo had already loaded the rockets the night before so we could get the event started as quickly as possible. The rockets were safely stored in our old blockhouse ready to go.

Each of the students had painted their rocket with a unique pattern and color scheme to better help identify them later. The photo below is from just after the build event. 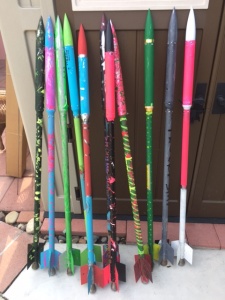 Dave allowed me to assist on the pyro-op duties including rail loading and connecting for firing. As promised, we worked quickly to call out each one as they were loaded in the rails. Dave and I worked very efficiently to get each one off swiftly and safely.

The LAPD rocket was the 11th one in the series. It had a few special features including a smoke tracer in the payload section and a tail-fin mounted camera. 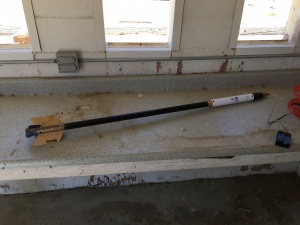 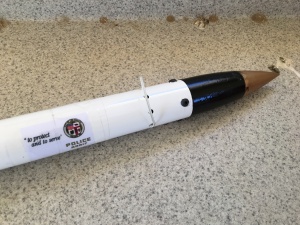 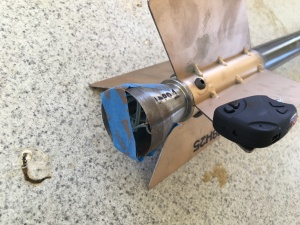 The LAPD rocket was able to be recovered shortly after launch thanks to the smoke tracker. The nose cone wasn’t able to be recovered but the camera on the tail fin remained in tact. We have had good luck with one of these keychain cameras in the past. Although the camera imparts a spin on the rocket, the flight is very stable. Once the footage is downloaded, and depending on the quality, the RRS will post it on our YouTube channel. It should be a lot of fun to see (fingers crossed).

The specific brand of smoke tracker used was “Enola Gaye”. Given the success of the flight, the RRS should certainly use more of this product in the future. There has been some discussion to increase the number of holes in the payload section to allow more of the smoke product to escape throughout the flight. 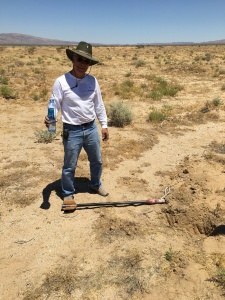 Due to the summer heat, the students of Jordan Downs didn’t go downrange to search for their rockets after the launching was over. However, Frank was able to locate and recover (dig up) one from the event. 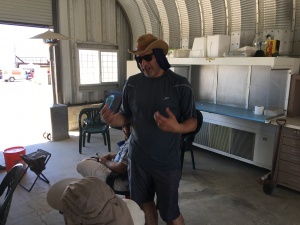 Frank in the Dosa Bldg. just before going out to search for rockets 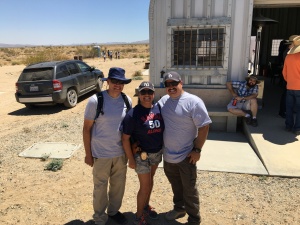 The RRS thanks LAPD officers Acuna, Plascencia and Terrazas 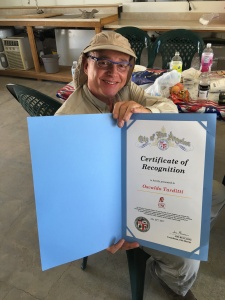 University of Southern California (USC) and RRS president, Osvaldo Tarditti, were glad to receive a certificate of recognition from L.A. City Councilman, Joe Buscaino of the 15th district for putting on this event with the students of Jordan Downs in Watts. It is with gratitude that the RRS accepts the certificate and we hope to work again with the students of Jordan Downs and other groups in the city.

As for my own rocket which would have been the 12th alpha launched, an electrical problem with the timer forced me to pass on launch. Although each part of the circuit seemed to work individually when I tested them the night before, the fully integrated system failed the demonstration at the site. Working with Richard and with some more time, I can resolve the issue, improve the design a little, and fly the parachute system in the alpha at the next launch event. 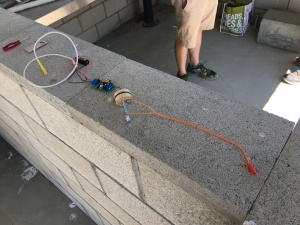 UCLA was also at the MTA to continue their work on their liquid rocket project. UCLA proceeded after the Jordan Downs launch, but had an electrical problem which prevented their scheduled cold flow testing. UCLA hopes to reset their efforts and be back at the MTA for more testing in late August.

Chris, Richard and I discussed making some rocket candy (sugar/KNO3) at the MTA loading area, but it seemed that there wasn’t enough time to get things started. With most of the resources already on hand, we’ll wait for the next event for Chris to cook a small batch of this classic amateur rocketry compound for demonstration purposes.

For more information on the RRS educational programs, please contact us at:
events@rrs.org

Also, if I have missed or misstated anything, please let me know. Our next monthly meeting will be August 11th at the Ken Nakaoka Community Center in Gardena, CA.
secretary@rrs.org