The RRS was glad to participate in the Critical Design Review held at UCLA Boelter Hall. UCLA is preparing for the upcoming Intercollegiate Rocket Engineering Competition (IREC) to be held at Spaceport America in New Mexico on June 20-24, 2017. 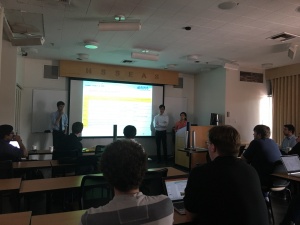 UCLA will be flying a 10-foot long, 6-inch diameter rocket to an altitude of 10,000 (+/- 2,000) feet carrying a payload at least 8.8 lbm in weight meeting ESRA standards for the competition. The rocket uses an M-class commercial hybrid motor with three solid motors in parallel. After covering all major systems (structures, propulsion and electronics) over the course of the day, we took a tour of UCLA’s rocket laboratory in the basement of Boelter Hall. 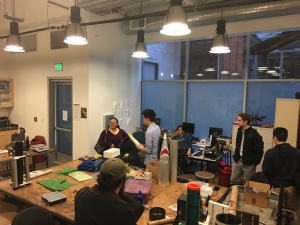 We thank Dr. Mitchell Spearrin for his invitation and hope to work with UCLA on testing their IREC rocket design in the near future at the MTA before the competition in June. 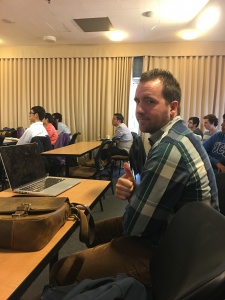 Despite the rain, we had a good attendance at the February meeting on Friday, the 10th. We came to order at 7:51pm.

Chris Lujan said that he’d put together some notes for a future posting on sugar rockets since he has had some experience with a classic in amateur rocketry. Look for that in the coming months.

Larry Hoffing and John Mariano have started an alpha rocket build event with GALA starting this month. The USC RPL will be assisting in the instruction and the event should culminate in the launch event at the MTA on March 25th (** updated **).

Vera Mulyani who was on travel called into the meeting to give her presentation on Mars City Design. USC hosted a very successful 2016 GALA event that included Buzz Aldrin as a speaker. She’s been working to solicit donors to help start prototype building of some of the first 3-D printed concrete structures. There will be a fundraising dinner on May 25th as a benefit to the organization.

Ultimately, the RRS will house a few of these exotic 3-D printed structures at our MTA site that will give us a cool extra shelter or two. According to the regolith samples taken by the Mars City teem on their site tour, the dry lake bed environment regolith materials of the RRS MTA site should work very well.

After Vera’s presentation, we discussed more of the RRS Symposium. An idea was put forth to consider having a small static fire demonstration at the RRS symposium event with Steve Majdali. Possibly a black powder or sugar rocket? Still considering the details of how we could do this which certainly involves getting approval for the nearby fire station.

Also, we’ll need to get to work on the full scale mockup of the SuperDosa rocket. Osvaldo can make most if not all of the pieces, but maybe we’ll need help in getting everything ready before the symposium.

Just to re-iterate, the symposium date is hard set to be April 22nd at our same meeting location at the Ken Nakaoka Community Center (formerly called the Gardena Community Center) in Gardena, CA. One of the flyer designs we’re starting to pass around is linked below. Please download, share and post with anyone interested in coming. We’d like to start spreading the word.

As of this month’s meeting, the RRS will formally begin the history project as we are one year before our 75th anniversary. We plan to interview some of our older and current members at the symposium or in separate private interviews to recall and document whatever they can of their experiences with the RRS over the seven and a half decades of our society’s history. Our upcoming symposium will be a good opportunity for members new and past to get together. We’ll also use this opportunity to interview some and at least update contact information for members who would like to meet with us later.

Richard Garcia has been in discussions with an owner of a set of propellant tanks and a vertical test stand. The owner may consider donating a substantial amount of hardware to the RRS.

The RRS has agreed to support UCLA in an undergraduate design class (MAE 157A) by supplying some of our standard alpha and beta rockets. I have invited UCLA to come take a tour of the MTA at the next launch on March 25th. The launch event for this class with UCLA is tenatively scheduled for Saturday, June 3rd, once we can confirm this date.

Richard Garcia and myself were invited to UCLA’s Critical Design Review on Saturday, February 11th for their hybrid rocket project at the next IREC launch in June. We were also invited to a Conceptual Design Review (CoDR) on March 1st for the Tin Can project (liquid bi-prop rocket competition) at the FAR site.

We’ve been having weekly teleconferences for the symposium to help track assignments and note progress. The symposium is picking up a lot of momentum as we have confirmed several speakers from private industry and universities. We still need a lot of help from our members and others who would like to support the RRS.

Our meeting adjourned as the Ken Nakaoka Community Center closed at 9:00pm.

Our next meeting will be Friday, March 10th.