The upcoming launch at the MTA is confirmed for this Saturday, the 12th of November. Student teams from the Rise Academy in Compton will launch RRS standard alphas. I am putting one together myself with a ceramic-coated nozzle.

The weather looks good (Cantil, CA) for this Saturday.

The October 14, 2016 meeting of the RRS was held at USC in the Wallis Annenberg building. Frank started the meeting at 7:30pm. We were glad to have two new visitors come to see us at USC.

Carter Allen of the USC Rocket Propulsion Laboratory (RPL) was first to present as he and his team was quickly leaving campus that night to be ready to conduct testing tomorrow at the Friends of Amateur Rocketry (FAR) site adjacent to the RRS Mojave Test Area (MTA).

USC has been working hard at their space shot launch goal for several semesters now. After a setback at Spaceport America, New Mexico, and a recent static fire test experiencing burn-through, USC’s current 6-inch diameter, 60 inch long motor design with a new insulation is set to be static fired at the FAR site tomorrow (October 15th).

If this design change proves successful, next USC flight of this subscale design will be at Black Rock, Nevada, sometime next month in November. 180,000 feet is the altitude goal. The next step, is to scale up to the space shot of 328,084 feet altitude (the 100 km von Karman line) by April or May 2017. The final design will be scaled up to a 8-inch motor size. The USC RPL team is 50 members and growing and has been making great strides. We wish them success!

Unfortunately, the USC RPL tour after the meeting did not occur as the team was leaving town for tomorrow’s test.

In other news, the RRS is still pursuing qualifying more pyro-op’s to help making testing more frequent and convenient. Osvaldo and others have been studying the rules hoping to take the test soon. We have a few members who are qualified, but it would help the RRS to have a deeper roster as our society grows. The question of the general necessity of a pyro-op is clear.

Discussion moved to the RRS alpha. Osvaldo brought a steel nozzle as an example to show and tell. Larry Hoffing brought one of the aluminum nozzles. I kept both for my next alpha build to be launched in November unless someone objects?

George Dosa kept detailed records of prior launches showing the apogee and down-range distance. He was adamant about taking data and making good measurements each time. It was agreed that the society needs to be more methodical in its launch data collection and trajectory monitoring. The RRS stresses learning.

As announced separately on this site, the RRS symposium is moved to April 2017. Frank is working on confirming the agenda and presenters.

Mars City Design Powerlab held their 10-day workshop at USC. Buzz Aldrin was a featured speaker and had the audience riveted. One of the winning proposals seeks to build their structure at the RRS’s Mojave Test Area (MTA) which could be a dual benefit to the RRS having another useful structure and winning team proving their concept. Frank provided the following link:
Mars City Design – Competition Winners

Dubai Museum of the Future

The initial presentation of the SuperDosa project was a success. The goal was to introduce the RRS’s intent to reclaim the amateur rocketry altitude record. The RRS is solidly behind this initiative and some of the initial planning is underway. There will be updates in the next months to come. We have already begun the process to restart composite propellant making, have an initial design and have begun to identify resources and experts to help us get a good start. There will be more as this project further develops.

Larry Hoffing and John Mariano began their 6 week school presentation at the Compton Magnate School. Tentative launch date for the launch event for Compton Magnate School is November 12th at the MTA. Dave Crisalli will be the pyro-op for this event. As many as 10 alphas may be launched. I hope to bring one or two of my alphas to try also.

I gave John Mariano access to the RRS Alpha Build presentation that Larry and I worked on. John has given many of the educational classes at schools and his input will be good to improve the content. Attendees at the meeting also had a chance to review the content at the meeting.

The RRS is approaching other schools to get their participation. A girls school in Koreatown is interested. The CAM school in Dominguez Hills (Carson, CA) was donated machining equipment from Northrop and may be another interested party in having the RRS do an alpha build event.

Meeting adjourned at a little past 9:30pm.

The next meeting (Friday, November 11th) will be at our usual Gardena Community Center in Gardena. There will be a launch the following day on Saturday the 12th. Let me know if there is anything I missed or is inaccurate.

The Friday, October 14th, RRS meeting will be on the campus of University of Southern California (USC) at 7:30pm.
Allow extra time for travel as there is some walking necessary to get to the meeting site.

We will be meeting at Wallis Annenberg Hall, in Room ANN 106, 3630 Watt Way, Los Angeles, CA, 90089-0281.
Please enter the building from the patio as the rest of the building entrances will be closed after 6pm. 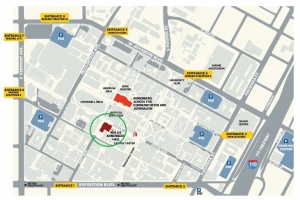 This is a different Annenberg building than the other Annenberg Hall further north on campus.

USC campus can be found off the I-110 freeway.
I have had good luck finding parking at Parking Structure “A” (PSA) near Entrance 6 off of S. Vermont Ave.
Many people approach USC from Exposition Blvd. which also works (Entrance 1).

Send us a line on the RRS website if there are problems. Hope to see everyone there!