The July 12th meeting was quite an active one with about 13 in attendance and some interesting things to be shared. To accommodate Polaris this October the Launch may either be moved up to September or postponed to November. We’ve not officially set the date.

Larry Hoffing and his son did a great demonstration of polyurethane casting a nosecone. They had a mold of the nosecone and they poured in the polyurethanemix which was onepart resin and one part hardener by volume. They poured in some of the mix and rotated the mold as it hardened to make a layer of urethane around the walls of the mold. They did a few layers like this. The mold can be left like this to be hollow or as they did it can be filled the rest of the way to make a solid nosecone. The finished product can be sanded and it can be drilled out to make it hollow as well. The process is less precise than machining but significantly reduces tooling costs.It was discussed that the mold was originally from George Dosa for the Alpha rocket, and that Frank has some of the original forms from George Dosa for making the molds for casting nosecones.

At the last meeting a few copies of the RRS beta plans went out. (I’ll eventually have a PDF of the plans on the new web site) With an impressive turnaround time Keven Tice came back this month with a finished rocket. He did an excellent job with the rocket and it looked great. He made some modifications to the design. He increased the diameter of the payload section, and he made a fin can instead of using straps. He also changed the fin shape from a parallelogram to a symmetric trapezoid.It total he spent around 40hrs building his beta. Since he changed the OD of the payload section he will have to make an adapter for the launcher. We look forward to seeing it fly at the next firing.

The 3D printed rocket competition has finished and I had to opportunity to share the end results and talk a little about the engine that we submitted. The winners will be announced around the end of July. If you want to know more you can see everything from us and the other competing teams at the contests site. http://www.openspaceuniversity.org/#!designs2/cun6

Frank brought an RRS patch from the late 80’s and an RRS hat. He also brought and gave out some extra copies of an old RRS newsletter. (Volume 58, number 1, march 2001)  He also mentioned to me that from his stint as the secretary of the PRS (there equivalent of the RRS president) he has a copy of all the PRS newsletters that he wants to bring to the next meeting of the RRS so I can scan them for the RRS library.

I think the best treat of the meeting was something Frank brought to share. Frank showed a very interesting sort film featuring the RRS. Around the late 50’s early 60’s a college student from UCLA for a school film project create a short film originally recorded on 16mm film called “Whity” I won’t describe the whole thing here but it takes place at the MTA and Whity is a young boys pet mouse who’s is set to be launched in the nose cone of a large rocket when the boy has second thoughts about his pet’s safety.The film was well directed and well shot with believable and relatable characters and compelling story telling with a clear climax and resolution. The film felt like a little slice of history especially with every one dressed normally for the time. One of the characters also reminded me just a bit of Biff from “Back to the Future”

We were informed by John who was active in the society around that time about the concept for the rocket used in the film. It originated from the fact that typicalzinc-sulfur rockets seen at the RRS would have very high accelerations and would fly so fast that they would be very difficult to photograph and impossible to follow the rocket through its flight on film. To make a rocket more conducive to filming they made a very heavy rocket to slow its flight down so it could be filmed more easily. The rocket made use of a galvanized flue pipe for an outer skin and generous amount of wood on the inside.The crash as filmed was real and the parachute deployment was a special effects.

Frank has this film on DVD and I hope we can get it up on the new version on the web site. Since we don’t have contact with the original creator we may have to post it for members only. However most artists love to have their work seen, and I’m confident that if we got ahold of him they would be fine with making it publicly available.

I also wanted to share these pictures I found of Microcosm’s Scorpius S-RM launch vehicle with 20,000lb of thrust being static tested at the MTA. 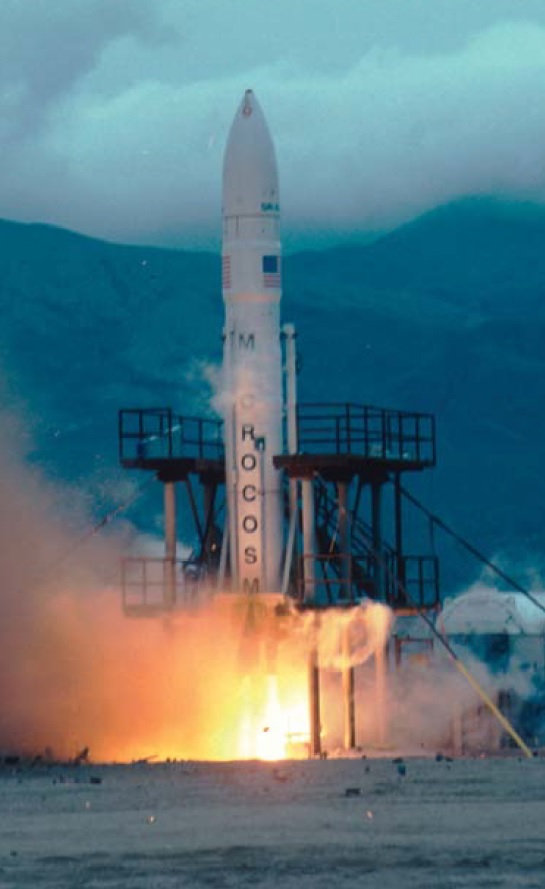 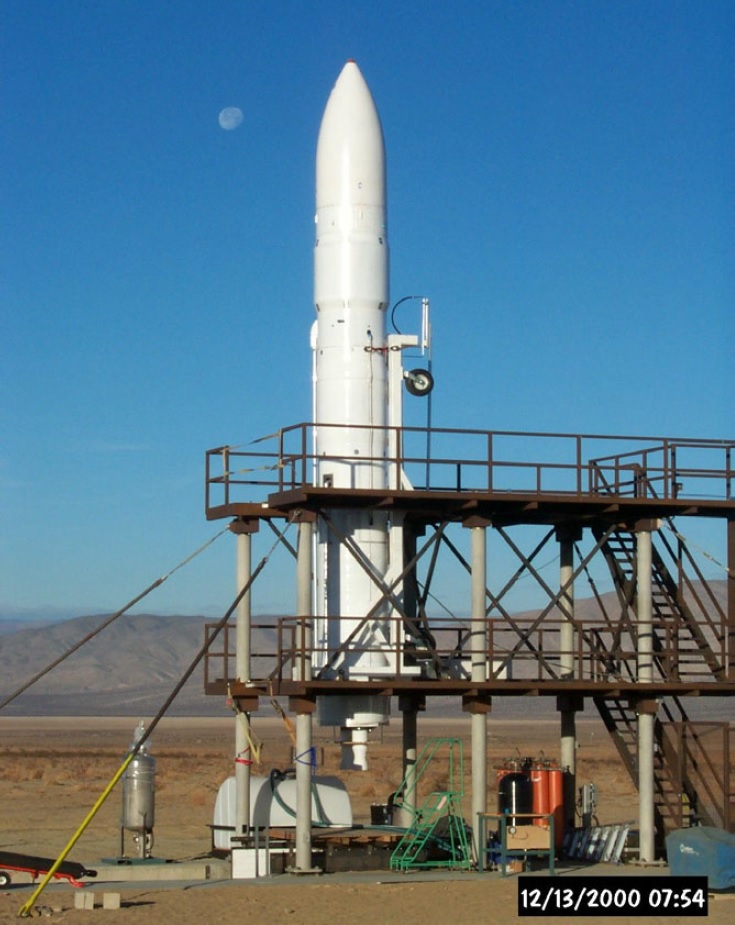 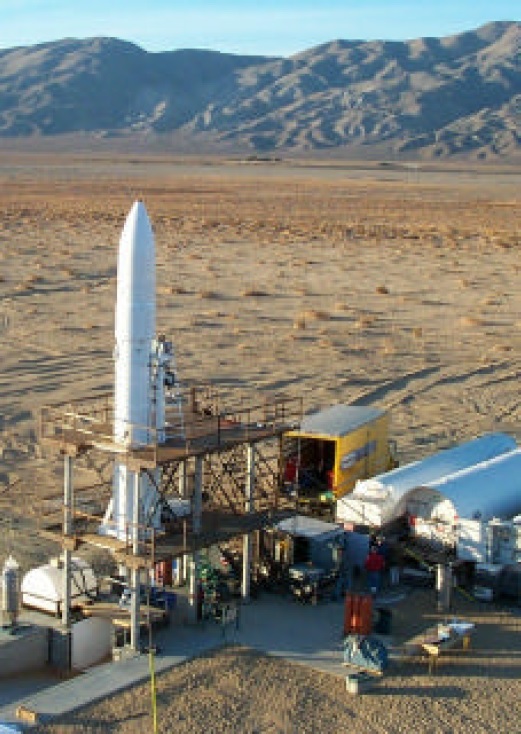