The University of Southern California (USC) Rocket Propulsion Laboratory (RPL) team led by Haley Karow had a static firing of their prototype solid rocket booster at the RRS MTA on February 17, 2018. The RRS was glad to support USC on yet another advancement in their solid rocket motor program for students. 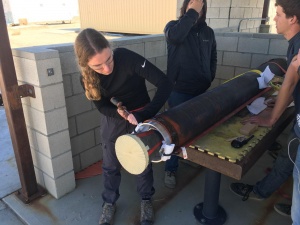 USC prepares their booster motor for testing at the RRS MTA, 2-17-2018

USC’s successful test demonstrated a 6-element bates grain solid motor with two improved features:
(1) a newly designed carbon phenolic nozzle with graphite inserts for the converging section and throat and (2) a linen phenolic and EPDM thermal protection system for the case. The motor grains were cast in Victorville at a site owned by Exquadrum. 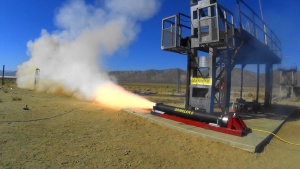 This full-sized motor design will power the Traveler III space-shot vehicle. The nozzle looked great after the firing, but a second nozzle will be used for the flight. The motor liner also did well. With a peak thrust of 4,864 lbf as measured by the USC horizontal thrust stand load cell, the total impulse was 41859.0 lbf-sec. Post-test inspections showed good results and the project can move forward with their flight vehicle. Ultimately, the Traveler III will attempt to reach an altitude of 400,000 feet (121.9 km) most likely from Black Rock, Nevada. 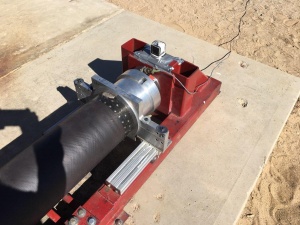 The Reaction Research Society (RRS.ORG) is a 501(c)3 educational non-profit group that supports universities, high schools and other responsible private groups with both educational programs and resources for rocket testing. Now in our 75th year as a society, we hope to expand our reach to others as we grow into a new quarter century.