We were glad to be visited by Waldo Stakes, Curator of the Saxon Museum in Boron, California, and well-known rocket car maker. Wilbur Owens was kind enough to bring Waldo to the meeting. 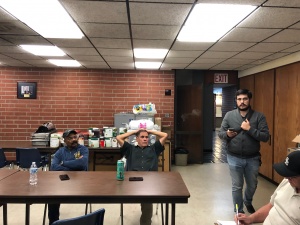 The agenda for December was kept short as the RRS wanted to take some time to celebrate our accomplishments this year.

After coming to order and the reading of the treasury report, we began the shortened agenda.

[1]
The results of the elections were announced by email from our election chairman, Larry Hoffing, who could not attend. The full slate of officer candidates were voted unanimously with no write-in’s.

The RRS officers for 2019 are as follows:

We thank our appointed election chairman, Larry, for his service.

The newly elected officers will start their new terms at the beginning of the calendar year. All of our appointed positions at the RRS remain the same as the executive council has voted to retain them. We are thankful to all of our new and continuing membership for making this an important milestone year for the society.

[2]
The next topic was to discuss the UCLA hot fire event at the MTA in November. Osvaldo was very impressed with the UCLA team in how well they communicated and their preparation for a safe hot-fire test. Despite having an earlier setback, they recovered to have a hot-fire in the early night hours that gave them valuable data for their next design iteration. The RRS is glad to support university groups with our testing site. It is great when everyone puts safety and organization first. 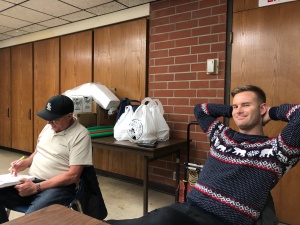 Osvaldo reads off the list of events we conducted at the RRS over this anniversary year, 2018; Michael Lunny looks on

The RRS has had other university groups express interest in using our Mojave Test Area (MTA). To any groups wanting to use the RRS MTA, please contact the RRS president by email.

[3]
The last of the scheduled agenda topics was the announcement of the official date of the 2019 RRS symposium. The symposium will be held on Saturday, April 27, 2019, at the Ken Nakaoka Community Center in Gardena. As before, we will have entire first floor and outdoor courtyard. 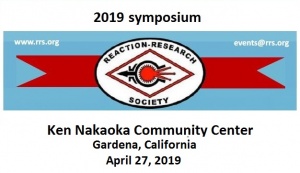 The RRS has had great success in getting a range of speakers from industry, academia and government agencies. We plan to invite the Navy China Lake, Air Force Space and Missile Center, NASA Goddard Spaceflight Center, Northrop Grumman, Relativity and the Additive Rocket Corporation just to name a few, as well as several of our local and regional university rocketry groups such as UCLA, USC, Cal Poly Pomona, CSULB and LMU just to name a few. In the new year as invitations go out and we get confirmation, we will update our agenda for the April symposium. We hope to have an even larger turnout both on our stage, at the exhibition and of course our public audience.

The RRS will be holding a 2-hour panel session as the final event in our speaker series. The RRS is working on building this panel from a good cross-section of industry, government and academia to look at the state of affairs in space today and looking ahead to what may come next as the industry expands.

To those who stayed to the end last year, we were provided a rare treat by former member Bill Claybaugh as he presented his assessment of the current aerospace industry. We would strongly encourage everyone to plan to stay the full day as we will be bringing out more special things as the day goes on.

[9]
This topic was on the original agenda, but we thought we wouldn’t have time. RRS member, Alastair Martin, through his company, Production Tribe, is starting a pod-cast called Rocket Talk Radio. RRS director of research, Richard Garcia, and the RRS secretary, Dave Nordling, have agreed to be the first guests on this pod-cast that will talk about current topics in space and rocketry. As the first few podcasts are made, he’ll look to have other guests, to talk for an hour over a range of questions posed by Alastair and the participating audience.

[X1]
Osvaldo went over the long list of events we held at the RRS starting with the Aerospace Corporation launch test of their prototype liquid-hybrid rocket motor, the three launch events we held through the LAPD Community Safety Partnership (CSP) program where we were able to engage 112 kids in the at-risk communities of Watts in Los Angeles. Both USC and UCLA had a lot of success in their respective rocket programs.

Although USC did have a major setback in their Traveller III flight, they are well positioned for a very successful flight on their long journey to be the first university group to break the von Karman line into space with their boosted dart. The RRS is glad to be recurring partner with USC by assisting with their ground testing needs.

UCLA has also had a successful year with their liquid rocket programs and the RRS is glad to continue our support.

New RRS member, Dmitri Timohovich, and myself journeyed out to the MTA on December 2 for a site improvement project to mount the new road sign we had made. As I was feeling very under the weather on that afternoon, Dmitri did a stellar job in helping the society put a visible marker at our big iron gate leading the way into the RRS Mojave Test Area (MTA). The RRS thanks Dmitri for his hard work for the society. 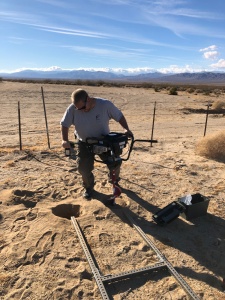 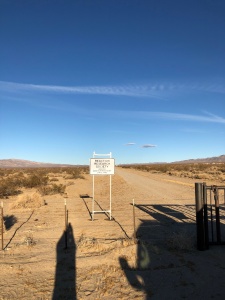 [X2]
RRS member, Jack Oswald, presented his current progress with his large solid motor building project. His team have been working hard this year having some successes and failures, but always learning. His new ballistic evaluation motor design will correct some of the prior deficiencies in the earlier design and is expected to produce high quality results that should finalize his motor design. Jack and his team from the former Chaminade rocketry group have made a lot of progress and have also helped me with my smaller BEM design. Based on our conversation at the December meeting, I think I will have to re-visit some of my assumptions. Many thanks to Jack and his team’s hard work in supporting the society with their ambitious goals.

[X3]
RRS director of research, Richard Garcia, was not able to attend the December meeting, but he did provide a progress update for the RRS standard liquid project. His injector and chamber design is nearly finished and seems to have all the right features to proceed with build. The injector design is based on a previous design used by the RRS in past liquid rocket projects. He is also re-using his ablative chamber liner feature for this smaller 125-lbf LOX-ethanol engine design. His analytical model of the propellant blowdown system seem to anchor his predictions for what will hopefully be a successful hot fire test in this coming new year, 2019. The RRS is working hard to anchor a reliable and simple to build liquid rocket engine system that university groups can use for liquid rocket competitions in the future without having to start completely from scratch. We will provide updates as this project advances.

[X4]
Richard also brought up the idea of building a rocket sculpture to the right of our big iron gate at the MTA. The society welcomed the idea and we hope to bring this concept to life sometime very soon. 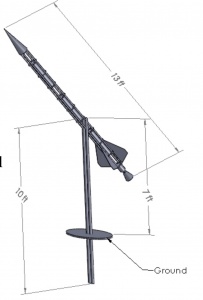 Richard Garcia’s rocket sculpture concept; soon to be seen at the RRS MTA

[X5]
Lastly, Frank was presented with a Community Service award by the Los Angeles Women Police Officers and Associates (LAWPOA) to honor the continuing work of the Reaction Research Society with the LAPD CSP. It is with great pleasure that the RRS accepts this recognition and reaffirms our commitment to this strong program that has done a lot of good for the young minds we hope to inspire. 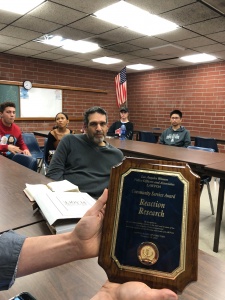 Bill Janczewski holds up the LAWPOA Community Service award presented to the Reaction Research Society; I think I caught Frank a little off-guard in this photo? He was very pleased.

Our next monthly meeting will be on Friday, January 11, 2019. For an update on our intended agenda for each meeting, check the RRS.ORG website under the “Forum” section.

We look forward to starting the new year with preparations for the 2019 symposium and we will need our full membership to help make this event an even greater success.

Also, the RRS is talking about holding one of our monthly meetings at the Tomorrow’s Museum at the Compton Airport. Also, Jack Oswald has been working on getting tours of The Boring Company in Hawthorne and the Point Mugu Naval Base sometime in the new year.

The RRS wishes everyone happy holidays and a happy new year.
—