This is a posting of a report written by our current society vice-president, Frank Miuccio, many years back. It has been reproduced here on our website for preservation. A hard-copy revision of the document will be published in the society archives. The original date shows it was Revision A, dated March 9, 1989, nearly 30 years ago. Some of the figures mentioned in the text are missing (until we find them again) and others have been remade for clarity. 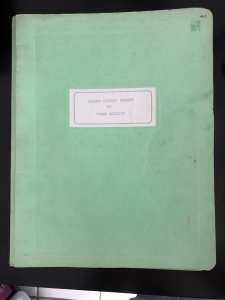 In reading the report, you can see that the technology of some aspects of the design are no longer commonly practiced, such as the use of mercury switches and mechanical relays, but the circuit principles are still sound. I have noticed that the model rocketry community, such as our friends at Rocketry Organization of California (ROC), have made great strides in timer designs.

There are many commercial suppliers across the country that make a range of simple and complex designs that are reliable and affordable. Some products can be bought ready to use in your rocket application.

Also noteworthy is that lithium polymer battery technology is taking over from the conventional 9-volt. This doesn’t come as a surprise to many, but certainly worth mentioning. Some people still use the old battery types, but there are many smaller and very powerful options in batteries thanks to the growing airborne drone community.

It is the society’s intention to show this report to inspire our members today to expand upon the work done before. Many effective timer circuits are commercially available, but years before, to have such a device required a bit of ingenuity combined with plain trial and error. Enjoy!

On June 25, 1988 at the Mojave Test Area (MTA), a single stage micrograin (80% zinc, 20% sulfur) rocket was flown with a simple payload that anyone can build. The payload consists of a timer that was set for approximately 18 seconds, a parachute, and an ejection mechanism. The timer was used to eject a parachute 18 seconds after burnout and was designed to incorporate the least amount of components. The timer consists of 4 components, 2 batteries and 2 safety switches and a mercury switch.

The flight was a success. The parachute ejected and was spotted by the tracking crew, who were located approximately 1000 feet away from the launcher. All three objectives were met with a positive result. A few shortcomings were noted. The parachute, 24 inches in diameter, drifted the rocket north-east and the rocket was lost. Also, the color of the parachute was white which was a problem in spotting.

The timing circuit has been used three times.

The next time, the timer was used as a stage delay was in December 1988. The circuit was packaged in a separate module which would be installed after fueling of the rockets.

The third attempt wasn’t as successful as the other two. The timer failed to function. A possible culprit could have been one of the safety switches which was installed backwards. The switch was installed with the “ON” in the upward position. This creates a problem since the acceleration (from launch) could force the switch in the “OFF” position (downward).

The timer looks promising that it can cover various time constants. To determine the desired time the values of the capacitor [C1] and resistor [R1] can be varied. One can calculate the values needed as follows in the formula below.

The following steps are used to achieve the desired time constant when building the circuit:

(1) Wire and/or solder in the circuitry except the resistor [R1] and capacitor [C1].

(2) Chose a value for the capacitor [C1] and permanently install it in the circuit. Note that the value needs to be in the microfarad (uF) range. In this report, a 22 uF capacitor was used.

(3) Calculate the value needed for the resistor [R1] by using the time delay formula. Note that this will only give you an approximation of the actual time delay. The resistance will be in the kilo-Ohm to low mega-Ohm range.

(4) Adjust a potentiometer (also called a “pot” or a “trim-pot”) to the calculated value (Pin 1 to the wiper) and temporarily connect the pot in place of the resistor [R1] (pin 1 to the wiper). 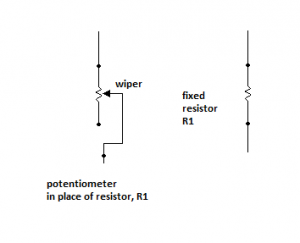 Potentiometer (adjustable resistor) next to a fixed value resistor

(6) Adjust the pot as needed and repeat Step 5 to get the timer delay correct.

(7) Measure the resistance value of the pot (Pin 1 to wiper) with a voltmeter then find and permanently install a fixed resistor of that value in its place [R1]. In this report, a value of 732 kilo-Ohms was measured when the circuit met the desired time period. A more common size of resistor is 750 kilo-Ohms which is close enough. 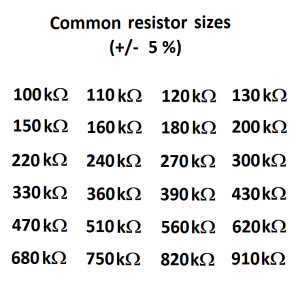 (8) Test the timer to verify the accuracy of the time constant.

(9) Once the circuit is tested and complete, surround and enclose the timer circuit with RTV. This is needed due to the G’s experienced during flight.

I have found that in modern times (circa 2018) electronic component stores are not as common as they once were. RadioShack is still in business, but they are not the big company that they used to be. I have had good luck in getting what I need from a local store in my neighborhood in Westminster, CA (Orange County). They have nearly everything an electronic hobbyist could want including lithium polymer batteries of all sizes. 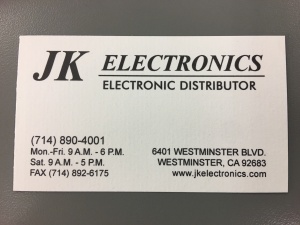 Ordering from online suppliers (DigiKey) is always an option, but the catalog information posted by the mainstream suppliers can be difficult to interpret if you are not an electronics expert. Also getting small quantities (less than 100 units) can also make ordering excessively expensive when the shipping costs far more than the handful of parts you are ordering. Amazon and Ebay can be a helpful resource, but the buyer must be aware of the specifics of exactly what you need. Always do your homework, consult the advice of experts and you will be more sure to get the components you want.

Also of historical note, the K1 RELAY element of Frank’s timer circuit used a W107DIP-5 (5-volt) mechanical relay made by Magnecraft Electrical Company of Northbrook, Illinois. Frank had the actual catalog from Magnecraft in his report so I took a photo of the relay he had selected. 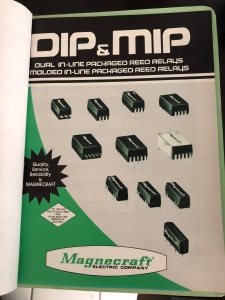 In this photo to the left, you can see the circuit diagram of how this Dual In-Line Packaged (DIP) reed relay is connected. This 107 model is a normally open (NO) single-pole, single-throw (SPST) type of device and contact rated for 10 VA.

I’m not sure if Magnecraft Electric Company is still around, but a modern update to the timer circuit design would likely use a solid-state NPN type of bipolar junction transistor (BJT) instead of the mechanical relay. This exercise is left to the individual to pursue, but not in this article. 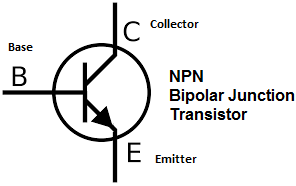 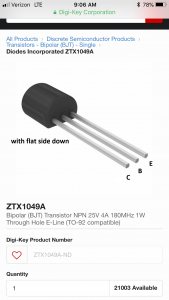 example of an NPN-type of BJT, rated for 1-watt, connections are labelled

It is important to make sure you know which pin or connection is which. The polarity of the circuit element you are using can be critical. For example, the longer lead on a capacitor is often the positive (+) one. The case on a capacitor should also have a negative sign (-) or a dash symbol to indicate which pin is the negative one. The circuit diagram that Frank included in his report has been careful to show these important details on polarity.

One should also note that very often the pins on a chip are numbered in specific sequential pattern, but the circuit diagrams often don’t follow these and simply call out the pin location by number only. I have put the pin diagram for the common 555 timer chip below to illustrate this important distinction between a physical layout and the schematic which doesn’t always match the physical locations. 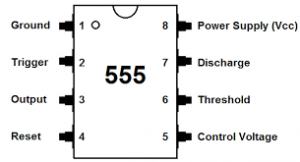 555 timer chip with the actual pin locations, notice the notch at the top to show where “1” starts

Just to give a little more detail on the mechanical relay that Frank used, I have re-created the pin diagram from the Magnecraft catalog picture showing the layout of the 14 pin connections. You’ll only need four of these connections (2, 6, 8, 14) as seen in Frank’s circuit. 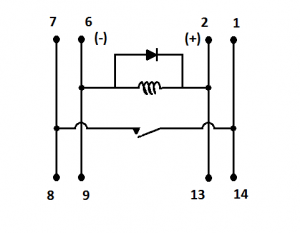 Also, a word about the timer delay formula is that it is based on the basic RC circuit type that has an exponential rise relationship once the circuit closes and starts. For simplicity, this formula just assumes a fixed 1.1 ratio to relate the product of the capacitance and resistance value into the predicted time delay in seconds.

It is important to understand that this is only an approximation and actual experiments are required to be more precise. Each of the lines and connections adds a little bit of variance to the actual delay time you will see and it’s hard to know exactly what this is without testing. Frank’s instructions go into how to do this by first using an adjustable resistor (potentiometer / pot / trim-pot) to measure what resistance you need, then you go get a fixed resistor to install at the end. This way, you can adjust for some of the real-world effects of your connections and verify that your timer will give you the fixed time delay you want. Also remember when buying capacitors and resistors, you will have to buy them in the sizes that are common. Even with the modest precision of these devices (+/-10% on capacitors; +/-5% on resistors), you can still get very close to the time delay you want and these parts aren’t very expensive.

Some people will put in an adjustable resistor in their circuit designs which is fine if the pot can stay tuned on the exact setting you want and you have the access to make adjustments if needed. Typically, you don’t have good access once the payload is installed on the rocket, so this is why this design has chosen to permanently attach a fixed value resistor after some testing to validate the operation.

Lastly, I should make a note on the use of RTV for “potting” or encasing the circuit. Room temperature vulcanizing (RTV) silicone rubber is a liquid compound that usually comes in small tubes and bought in automotive shops (e.g. Autozone) that after it dries will make a rubbery solid. This final step of encasing your circuit in a flexible but firm solid is considered by some to be necessary to secure the timer circuit from deflecting and possibly malfunctioning under the high acceleration experienced in the rocket flight.

Others feel that this step is not necessary. It has also been said that RTV is corrosive to electrical contacts and should not be used. In any case, you must make a structurally robust circuit that stays put, doesn’t break and will protect your connections from accidentally shorting against the interior metallic walls of your rocket parts (if you have them). The high G-loads from a micrograin rocket’s acceleration are not trivial. Proper packaging your payloads is a very important consideration in rocketry.

The method of successfully potting a circuit in RTV is probably worthy of a separate discussion. It is wise to have all of your leads sticking out of the drying potting compound you’re using better it sets otherwise you can’t connect the right parts when the mess is dry. It sounds obvious, but wait until you screw it up?! 😉

Thanks for reading. Look to the RRS.ORG for more articles on different rocketry subjects past, present and future.